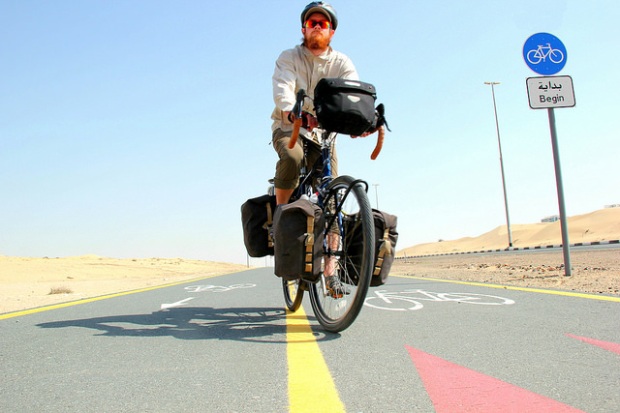 As part of my ongoing exploration of ‘Side Projects’ I’ve decided to start interviewing some individuals whose extra-curricular activities might help investigate and explore both the nature of side projects and the strategies for success.

For my third interview in the series I caught up with another friend who not only has his own side projects but supports others to get their projects off the ground too.

One half of adventuring husband and wife duo Tim and Laura Moss (whose own Side Projects will follow soon) Tim is also the founder of The Next Challenge – a blog and resource website devoted to outdoor pursuits, expeditions, and reviews of all the gear that you could ever need to venture outside. If you ever wanted to ask how to cross a particular desert or which camping stove or bike-bag to buy then Tim can help – for free.

Tim has a long-standing passion for the outdoors and after several of his own expeditions including climbing new mountains in Bolivia and Kyrgyzstan, and travelling around the world using eighty different methods of transport he started The Next Challenge in 2009 to encourage and support more people to get out of doors and pursue their own challenges.

Tim suggests that expeditions are in many ways a “discrete primary project” rather than a long-running side project. When you’re on expedition you’re not really trying to do anything else. However, the process of planning an expedition is a near-constant side project in Tim’s life. Already this year he and Laura have walked across Ibiza, trekked across a frozen Lake Baikal in Siberia, and bike-packed across Northumberland National Park – the logistics of this kind of activity means they’re constantly planning, preparing, and training.

Then there are also the part-time expeditions they’ve fitted around their jobs – Running the Tube lines over-ground and Swimming the Thames. Just reading Tim’s blog can be exhausting work.

However, what interested me about Tim’s story is the role that The Next Challenge website itself plays in Tim’s life. He describes it initially as “half-way between a hobby and work”. It’s hard work, but largely enjoyable. He has tried in the past to make more of a living from it but has come to realise he prefers to work on it as a side project.

It mixes his outdoor passions and his self-confessed geekiness about both blogging and outdoor kit.

Tim admits: “I regularly spend my evenings poring over a spreadsheet, compiling the weights and dimensions of different camping mats in preparation for a new equipment review”.

It’s also something he takes professional pride in: “The outdoors is something I know about and am good at – I’m good at knowing about Bivvy Bags”. That expertise is important to Tim, especially as he pursues a new day-job in professional services where he is a relative novice.

However, shifting from trying to make a living supporting other people’s expeditions, to pursuing the Next Challenge as a side project has liberated him. Freed from any need to make a living from it, worrying about profit, he can “indulge” his interests, write the blogs he wants to write, and plan his own adventures. “I assumed that because I enjoyed planning my own expeditions I would enjoy planning other people’s but that wasn’t always the case, asking awkward questions of people to help me out is much easier than asking on behalf of someone else.”

Tim never had a business plan for The Next Challenge. Ironically, since stopping trying to make a living from it he has come to a strong perspective on how it could be made to work commercially and does now in fact make more than he did when it was full-time. Whilst Tim repeatedly claims to not have been “business-minded” when he started out, I think he now knows very clearly (albeit through trial and error) how an expeditions business could work – he’s just choosing not to pursue that route because it’s not, on reflection, what motivates him.

“When I wrote my first book, I didn’t give any thought to the income but really should have done because it was supposed to pay the bills. I don’t need the next book to put bread on the table in the same way but because I have a little more self-awareness, it will probably generate more income.”

Similarly, whilst Tim has enough interest and expertise in the technical aspects of blogging and social media he admits he’s only doing as much as motivates him rather than really sweating the passive income from his website. He has however gotten a lot better at it so it’s probably more effective now than when it was a necessity. The other staple of the professional adventurer – speaking – was something he rarely enjoyed and he disliked touting for speaking gigs.

Tim points out that since making a living is no longer the point of the The Next Challenge he sees income from the site simply as a metric to judge its success. The money helps make it all a bit more sustainable but primarily it helps him better understand what is working and what is not.

Tim is open to the possibility that The Next Challenge may yet become more of a living at some stage in the future, but is enjoying mixing it as a side project with a day-job that pays a regular salary and provides him with regular in-person social contact. Nonetheless, he might one day like to find a role that mixed his professional skills as an accountant with his love of the outdoors and outdoor equipment, and The Next Challenge is part of retaining his professional outdoorsman status.

One growing aspect of The Next Challenge is the annual expedition grant he awards to would-be adventurers which is paid for by earnings from his website and crowd-sourced donations. “The grants really feel like I’m doing a good – I’m proud of that.” In fact, that bit may yet become a small charity in its own right to really get that system of support right.

Tim, in a roundabout way, has not only discovered what makes this a pleasurable side project for him, but also how to make it a better business. By working on it as a side-project alongside a day-job he’s actually more focused, more efficient, and that reduced capacity has been a lens for analysing both his own motivations and the relative impact different strategies make to it as a business venture.

“I think it wasn’t commercially successful before because I wasn’t really trying to run it as a business, even though I should have been. Now that I have less time for it, I’m much more focused. If I’ve only got 45 minutes on my lunch break, do I really want to waste that tweaking the sidebar or should I be working on a new eBook? That focus tends to be on one of two areas: producing content that will genuinely help people get outside on an adventure and doing that whilst making some money (which can fund my own adventures or other people’s through my grant).”

So, what secrets for a successful side project would Tim share:

“Focus on projects that you can enjoy the whole process of – the mundane logistics of Swimming the Thames robbed it of the simpler pleasures of Running the Tube. The swimming was great, but we spent much longer in the car than in the river”

“Set big goals and break them down into smaller regular habits.” Tim currently has three big 3-year goals, broken down into quarterly milestones and weekly habits. For example, his book-writing goal translates to a weekly 4-hour writing target. He also has a weekly goals check-in with a friend who shares their own goals and habits progress.

Whilst some would see this as overly-managed I think this is just the kind of rigour and discipline that makes Tim so successful in his side-projects. Getting from vague goals to everyday behaviour is critical to enacting changes in your life.

5 thoughts on “Side Project Stories #3: The Next Challenge”